Holiday season kicks off with ‘The Nutcracker’ at Mercyhurst

For nearly 125 years, “The Nutcracker” has been a sweet holiday treat for audiences of all ages.

But more recently, it’s become a tradition for the Erie Contemporary Ballet Theatre, too. And now, for a fourth year, the dance company will start the holiday season early with Thanksgiving weekend performances at Mercyhurst University’s Mary D’Angelo Performing Arts Center.

“We think it’s a great time to schedule our performance,” said Sarah Purvis, founder and artistic director of the nonprofit dance company. “Extended families are together for Thanksgiving, grandparents bring their grandchildren and it’s a transition to the Christmas season for many.”

The production will present the same familiar fantasy full of toy soldiers battling mice and dancing delights set to Pyotr Ilyich Tchaikovsky’s iconic music, as well as feature about 200 different costumes and more than 100 performers.

But fans of “The Nutcracker” might also notice a few changes that give the ballet a unique Erie flair.

Since the story of “The Nutcracker” takes place in Germany in the 1880s, Purvis contacted the Erie County Historical Society about prominent German family names in Erie County during that time. That research will actually be incorporated into this year’s show, with a few familiar names — such as Curtze, Griswold and Stuertznickel — added among the guests in the first act’s party scene.

The local production will also honor Erie Mayor Joe Schember by using his German surname as the family name for the ballet’s main character, Clara. Schember, who is scheduled to attend opening night with his family, will also introduce both performances.

And those aren’t the only changes in this large community effort. For this year’s production, volunteers created new costumes for the Spanish Dance performers as well as a new tutu for the Sugar Plum Fairy that Purvis considers “just stunning.”

A new 10-layer tutu takes about 120 hours to make and, with the decorated overlay for the tutu and the appliqué for the bodice, the total construction time is about 160 hours.

The show will also feature a few rentals from Grosh Backdrop and Drapery, and lighting designed by Pittsburgh’s Bob Steineck.

“Our props and sets are continuously renovated and refurbished,” wrote Purvis in a news release. “They add all the magic that is needed to bring ‘The Nutcracker’ to life.”

Also integral in bringing the show to life are the dozens of local performers — from young children to adults — that will take the stage this weekend. This year’s cast includes Ava Kloecker and Avanel Munger, who will share the role of young Clara; Aidan Egloff as the Nutcracker Prince; Emily Emanuel and Harlie Yahn, who will share the role of the Sugar Plum Fairy; Tucker Miller as Herr Drosselmeyer; Tom Wager and Mary Vicary as Mr. and Frau Schember, respectively; and Mercyhurst University dance juniors Roman Hall and Austin Declos will play the Snow King and Cavalier, respectively.

Yahn, 18, said she’s been looking forward to this holiday production practically all year.

But this weekend’s performances will also be a bittersweet experience for the college-bound Fairview High School senior.

“This will be my last ‘Nutcracker’ with ECBT,” Yahn explained. “I am sad to see this season come to an end, but I am so lucky that I’ve gotten to perform such a great ballet with these incredible people over the last four years. It’s always a pleasure to work and perform with the amazing people I have grown up with.”

And it’s always amazing to experience “The Nutcracker” in time for the holidays — whether you’re onstage or in the audience.

“It never gets old,” Purvis said. “Beginning with auditions in the fall, the kids are so excited. And when guests, especially children, come to the performance, with the beautiful scenery, it’s equally as exciting — and very magical.”

In the Community Newsletter 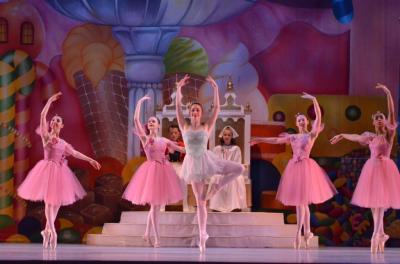 After the success of last year, the Erie Contemporary Ballet Theater sweetens up the east side as they return to Mercyhurst’s Mary D’Angelo Performing Arts Center for their fourth annual performance of The Nutcracker.

Though the venue and well-known tale of the Christmas season’s favorite ballet remain the same, audience members can still expect surprises. “Each year we change some of the choreography, we are constantly upgrading costumes, and we can use bigger backdrops and more props,” Sarah Purvis, artistic director of ECBT, said.

The holiday season provides a plethora of Nutcracker productions, but ECBT brings a family-oriented freshness with theirs. The original ballet, which tells the story of a Christmas Eve dream, sits at two-and-a-half hours. Potentially deterring children (and parents of small children), the creators of “Erie’s Own” Nutcracker removed repetitive measures, cutting down the runtime of the show while maintaining the suite’s beautiful scenes, beloved melodies and memorable characters.

“This allows children, and children at heart, to enjoy a family-oriented tradition together,” Purvis said of the change.

Families are a focus of the show on stage as well. “Every cast member involved has a family member that volunteers….This allows everyone to have a ‘stake’ and a responsibility to the production.” Purvis continued, “It truly is a ‘family’ production!”

The classic Russian ballet, most recognized by its Tchaikovsky musical score, becomes complete on the stage with breathtaking, handmade backdrops and costumes, sure to transport audience members into the magical world of Sugarplum Fairies.

With showtimes a month before Christmas day and eve, organizers expressed excitement for kicking off the holiday season soon after the Thanksgiving tables have been cleared. “It has always been a holiday tradition for family and friends to attend,” Purvis said. “[And] if I may be so bold, I think The Nutcracker is as much of a holiday tradition as watching A Christmas Story.” — Hannah McDonald

In the Community Newsletter

ECBT's Board President, Jo Theisen, was named one of Erie's 40 under 40!

Read below to see why she is such an amazing asset to the Erie community.

Jo Theisen has been dancing practically all her life — from kindergarten to Mercyhurst University (as a dual major in Dance and World Languages and Cultures) all the way to the court of law. The balance, grace, and coordination she's derived from ballet and modern dance have also served her well as a family law practitioner. She earned her law degree from Case Western Reserve University in Cleveland (while also performing professionally with the Ballet Theatre of Ohio) before returning to Erie to work with a mid-sized firm and ultimately establishing her own practice with partner Andrea Amicangelo in 2017. Says Amicangelo: "Jo is an excellent example of an accomplished woman who balances both the creative and professional worlds in her life. I believe this makes her a more open, insightful forward-thinking, yet disciplined individual."

The Board President of the Erie Contemporary Ballet Theatre and Board Co-President of the Erie Dance Consortium is equally adept at choreographing routines (one of which was selected for the Regional Dance America Northeast Festival in Manchester, N.H. this spring) and resolutions between families embroiled in difficult legal conflicts as a mediator and collaborative practitioner. Theisen serves on the board of directors for the Erie County Bar Association, including as vice-chair of the ECBA Family Law Section. She is also involved with the Erie Women's Fund and ATHENA Circle of Trust. Her objectives for a better Erie include providing "people with a healthier way to resolve their family law issues by offering individualized out-of-court resolution services" and "uniting and strengthening the dance scene in Erie." Nominators agree that Theisen is going through the motions the right way.